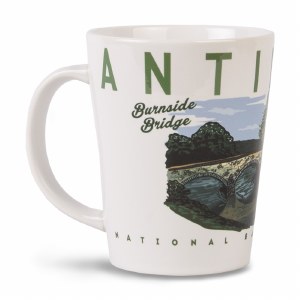 The Burnside Bridge was originally named Rohrbach's or Lower Bridge and was constructed in 1836. This structure quickly became one of the most iconic locations of the Antietam Battlefield, as it was the spot in which 500 Confederates kept Union Major General Ambrose Burnside and his troops from overtaking the bridge for three hours. Ever since this historic event, the crossing was known as Burnside Bridge. This mug displays an expressive illustration of the bridge and will be a perfect way to remember this historical structure during your visit to the Antietam National Battlefield!