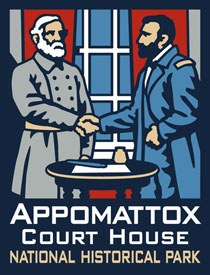 The Battle of Appomattox Court House was one of the last battles in the Civil War, and certainly was the last meaningful battle of the War. Following the short battle and Confederate realization that the struggle was lost, General Lee surrendered the Army of Northern Virginia to General Grant in Wilmer McLean's parlor room at Appomattox Court House.

This colorful collectible displays the meeting of the two brilliant American military minds as they shake hands in the Appomattox parlor. This moment was the first either had seen each of other in over twenty years. Reportedly, Lee was immaculately dressed while Grant was mud splattered and disheveled.

Reflect on the end of the Civil War, and the greater freedoms the conflict bestowed upon The United States of America, with this great collectible.